2009 might have offered a single memorable concert, but it was somewhat indicative of my life that year. Not bad, constructive in parts, but just lacking a certain ‘magic’. 2010 wasn’t like that. I’d put it on record as the most eventful year of my life. On a personal front, it saw the start of a new job, a house move, two relationships started and ended and a real growth in my DJing exploits.

Still plenty of time for live music though…..

Another band that had cheated me thus far was Current 93. Their tendency to host shows in awkward venues and their well-connected entourage often means the regular punter doesn’t get much of a chance to get tickets for their shows. Finally, however, I was going to get my chance. Two shows at the Kentish Town Forum to celebrate David Tibet’s 50th Birthday, and I had a ticket for one of them.

And what did I do to myself the night before? Poison myself on a reheated curry, that’s what! I wasn’t quite laid out, but I wasn’t exactly fighting fit, either. Luckily, mine was a seated ticket, up on the balcony, and dosed up on sufficient pharmaceuticals, I decided that I was going to see this band, illness or otherwise, before they disappeared on another lengthy hiatus. It wasn’t like I was contagious or anything, and it was either sit down at home or sit on the train then sit at the venue. Not exactly a strain on the body. Let’s go!

Living in the outer reaches of East London at the time, it was an unwelcome long journey over to the gig venue. The support band tonight were ‘Nurse With Wound’, not a band I particularly enjoy on CD, but live they made a sufficiently satisfying racket to provide an interesting precursor to the evenings entertainment. Current 93 themselves duly arrived on stage with about a dozen members. David Tibet is one of those artists who’s talents are as much about getting the right people to play for them as performing himself, but I never realised it took this many people to reproduce the songs live.

He then threw us a curveball by performing a set largely devoid of his best-known songs, instead taking us on a lengthy psychedelic-delusional-avant-garde-rock-quirky-apocalyptic-whatever it is he does journey though his disturbed outlook on reality. Slumped at the far back of the venue nursing a diet cola, I found myself strangely drawn into this bizarre sound emanating from the stage. There was no holding out for some favourite track, no singing along with a well-known chorus. I was a sick man watching a band that required some kind of distorted mindset to fully appreciate. On a healthy day, I would have found this disappointing. But on this occasion, a audio mindfuck from Tibet’s sizeable collective of musical misfits was about the only thing I could stomach. In any sense.

Infest took a year off in 2009, but it returning in 2010 with a revised layout that switched everything around, confusing all us regulars but working surprisingly well considering the last-minute completion of the venue. The big draw for me was Project Pitchfork, but I wrote about them in the previous part. Friday night headliner De/Vision were paint-dry tedious, so it ultimately fell to Rotersand to provide me with the one outstanding memory of the festival. I wasn’t bowled over by the fact they were playing, to be honest – they’d played a few years previously and I was hoping for someone who’d not actually played these shores quite so often to top the bill on Saturday night.

I should mention that I’d actually travelled to the festival with the band’s lead singer Rascal Nikov in the car with me. And I can confirm that his charisma, so apparent on stage, is only amplified in such a confined space. I therefore arrived at the festival in high spirits, filled up on cheap Bradford curry (this one thankfully non-toxic), and despite the disappointing live music on the first night, was just enjoying the weekend as a form of celebration of everything that had happened so far in 2010, how far I’d come and how much fun I thought lay ahead.

And if there’s one band that are just plain fun to watch live, anywhere, in any mood, at any time of day, it’s Rotersand. A last-minute schedule change had resulted in the band’s setlist being extended by 30 minutes, which entailed have to re-learn a whole bunch of unrehearsed songs. Did that hurt them? Not a chance. With Krischan and Gun providing the highly technical musical accompaniment, it was left to Rascal to play to the crowd. And occasionally wander around it, handing out free stickers.

It’s rare that a band I’ve seen so many times serves as the stand-out act of the entire festival, but Rotersand’s vibe that evening was so in tune with my own feelings. Sure enough, Project Pitchfork put on an excellent performance the following night, and in recorded form they’re still my preferred band of the two. But this InFest was all about Rotersand. I don’t think I stopped dancing for the full 90 minute duration. Unfortunately, 2010 was never quite as good again.

October 2010 – Strap Me Down With Disillusion, Tie Me Up With Lifelines

No, it wasn’t. Two months on and I was once again single, and not substantially advanced in any other sense. And for the second consecutive Halloween, a long awaiting band was making a rare (in this case first-ever) London performance at the Islington Academy. This time it was LeætherStrip, the prolific Danish electro-industrial project who’s one of the few bands I’m into that’s released so many CDs I doubt I could name them all off the top of my head. The band is the solo project of Claus Larsen, and that singularity extended to his live show. One bald, portly Dane in a pink shirt with a single keyboard rack and microphone. Not exactly an inspiring visual spectacle.

Once the new songs were out of the way, we got onto the classics. ‘Adrenaline Rush’, ‘Japanese Bodies’ and of course my own Strip favourite, ‘Strap Me Down’. I honestly didn’t care how little of the music was being played live, I just had a lot of tension to get out of my system, a real post-breakup catharsis. Possibly as a tribute to his first visit to London, Claus dug out his cover for ‘Sex Dwarf’ for the encore. By this time I was probably making ‘woohoohwooh’ noises in time with the synth solo, but there were no sober witnesses to confirm or deny this.

And that was essentially it for live music in 2010. A quick trip to the Pretty Goth Theatre late in November was about as live as it got for the remainder of the year. Onto 2011…..

It was really a bigger year on a personal level than a live one, but there a few more moments worth capturing.

When writing guides such these, it’s often hard to choose the next band to cover.  Sure, I can use social media to […]

The story ends neatly at the 20 year mark, with plenty of shows still to look forward to later in 2017 and […] 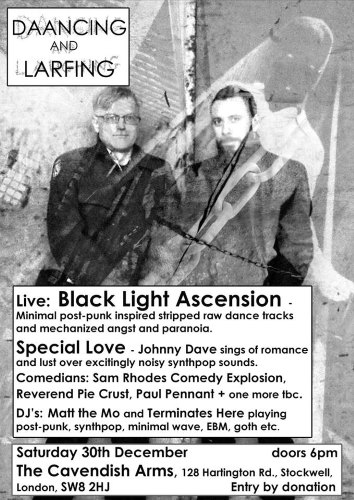